This advanced seminar traces transformations in citizenship and the franchise throughout U.S. history. Through readings, frequent short writings, discussion, and a final paper, the class examines the struggles over who can claim full citizenship and legitimate voice in the political community. It examines the divergent, often clashing, visions of legitimate democratic rule, focusing particularly on the debates over who should vote and on what terms. We examine the dynamics that have shaped the boundaries of citizenship and hierarchies within it, paying attention to changes in the civic status of Native Americans, property-less white men, paupers, women, African Americans, various immigrant groups, residents of U.S. colonies, felons, and people with intellectual disabilities. A significant portion of the class focuses on debates about U.S. democracy in the decades after the passage of the 1965 Voting Rights Act.

Through readings and discussions, this seminar will take multiple approaches to explore history, politics and society in 20th century China from the perspective of fashion. How to define politics from the dimension of fashion? What’s a politicized fashion? How did fashion reflect the power structure? How did fashion become a way of obedience and resistance?

Since Columbus’s arrival to the Americas, a number of commodities have bound together Europe, Africa, and the Americas, drastically changing the lives of many people on both sides of the Atlantic. Covering nearly five hundred years of history, this seminar invites students to explore the history of the Atlantic World through the “lives” of commodities such as gold, silver, sugar, cacao, tobacco, cotton, cochineal, indigo, bananas, and more. Tracing commodities from their production site to the moment of consumption, students will be able to understand the possibilities that the commodity-chain approach offers to historical research. As part of this seminar students will write a research paper (using primary sources) that will explain the commodity chain of a specific commodity.

This course examines Southeast Asia’s history from earliest times up until the mid-eighteenth century. The genesis of traditional kingdoms, the role of monumental architecture (such as Angkor in Cambodia and Borobodur in Indonesia), and the forging of maritime trade links across the region are all covered. Religion – both indigenous to Southeast Asia and the great imports of Hinduism, Buddhism, Christianity, and Islam – are also surveyed in the various pre-modern polities that dotted Southeast Asia. This course questions the region’s early connections with China, India, and Arabia, and asks what is indigenous about Southeast Asia’s history, and what has been borrowed over the centuries. Open to undergraduates, both major and non-majors in History, and to graduates, though with separate requirements.

HIST 3525 Life and Death in China Under Mao

How to define and interpret the human condition in China under Mao’s ruling (1949-1976)? What was human resilience in the face of power? How did Chinese people constantly find ways to re-organize their lives in a pragmatic way? How to evaluate the human cost of institutional arrangements? In this undergraduate course, we will use first-hand resources and case studies to closely analyze life and death in the Mao Era. Reading the lived experiences of five social classes, such as industrial capitalists, workers, peasants, cadres, and intellectuals, in those successively political movements after 1949, students will gain an understanding of how the Chinese navigated their lives in difficult times. They might be a senior partner for Shell in Shanghai, a hearted Christian and wife, an outspoken intellectual who was persecuted over years, and a former hard laborer who is today one of Asia's best-known financiers or women from China's countryside and so forth. The course will shed light on the interrelations between institutional frames, individual identity, gender and revolutionary politics in the Mao Era and will highlight the many different experiences of life and death in Mao’s China, in terms of class, gender, generation.

HIST 3430 History of the U.S. Civil War and Reconstruction

A survey of the turning point of US. history: The Civil War (1861-1865) and its aftermath, Reconstruction (1865-1877). Not simply a history of the four years of battles, the course covers nearly forty years, from the end of the Mexican War in 1848 through the political deals made by candidate Rutherford Hayes in 1877 that weakened Reconstruction. The class examines this critical period from a variety of angles and perspectives, from diplomacy and law to race and gender, and from presidential elections to the impact of Reconstruction on the West and the North. And yes, a few battles.

HIST 2969 The Rise and Fall of the Soviet Empire

This course surveys the history of the world's first socialist society from its unlikely beginnings in 1917 to its unexpected demise in 1991. Traditional topics such as the origins of the revolutions of 1917, Stalin's Terror, WW II, Khrushchev's Thaw, etc., will be covered, but lectures will emphasize the interaction between the political, socio-economic, and especially the cultural spheres. A good deal of the materials we will study in this course will be drawn from the realm of literature, cinema, and art. 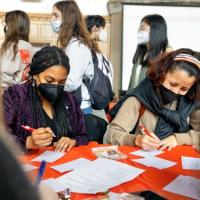 More than $12M donated to support students in 24 hours

An introductory history of Chinese, Japanese, Asian Indians, Filipinos, and Koreans in the United States from the mid-nineteenth century to the 1990s. Major themes include racism and resistance, labor migration, community formation, imperialism, and struggles for equality.

HIST 2562 Medicine and Healing in China

An exploration of processes of change in health care practices in China. Focuses on key transitions, such as the emergence of canonical medicine, of Daoist approaches to healing and longevity, of “scholar physicians,” and of “traditional Chinese medicine” in modern China. Inquires into the development of healing practices in relation to both popular and specialist views of the body and disease; health care as organized by individuals, families, communities, and states; the transmission of medical knowledge; and healer-patient relations. Course readings include primary texts in translation as well as secondary materials.