Students reflect on Marsalis visit: ‘He really touched my soul’

Famed jazz trumpeter and A.D. White Professor-at-Large Wynton Marsalis visited campus the week of Nov. 1. He offered a concert with the Barbara and Richard T. Silver ’50, M.D. ’53 Cornell Wind Symphony, and a talk open to members of the Cornell community.

Adedayo Perkovich ’25 felt a little intimidated when she saw that Wynton Marsalis’ chair had been placed right next to hers on stage during their Monday rehearsal.

“Mr. Marsalis has been a household name in my family since I was really little,” says Perkovich, principal oboist in the Cornell Barbara and Richard T. Silver ’50, MD ’53 Wind Symphony. “I grew up hearing his music and talking about what a jazz icon he is.”

Nervous and trying to play her very best during that rehearsal, Perkovich says she was soon talking with Marsalis, who gave her tips on her vibrato, praised her solos and talked about the intimacy of playing with other people. 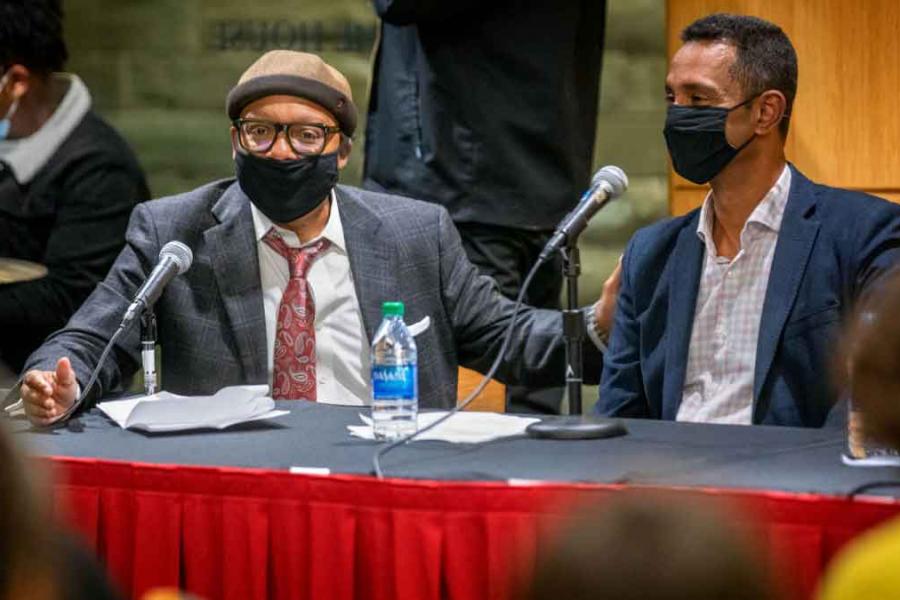 “When we played ‘Blues’ (for clarinet and wind ensemble), he talked about the piece honoring the souls of the people we’re playing with, but also honoring a tradition in the African American church,” says Perkovich, who plans to major in Africana studies and music. “I did hear the sounds of the church in that piece – when the trumpets come in with these shouts from the congregation. It was amazing that his composition created this image in my head even before he told us about it.”

Marsalis’ weeklong visit to campus as an A.D. White Professor-at-Large Nov. 1-6 was filled with interactions with students, as well as meetings with faculty, public talks and a concert with the wind symphony and his own quintet in Bailey Hall. The wind symphony’s half of the concert featured three of Marsalis’ compositions arranged by James Spinazzola, the Barbara and Richard T. Silver ’50, MD ’53 Assistant Professor and director of winds in the College of Arts & Sciences.

“This was a once-in-a-lifetime opportunity for the students, and they rose to the occasion,” Spinazzola said. “It was also especially meaningful to have Barbara and Richard Silver, who created the endowment of the wind symphony and associated professorship, in attendance. The performance showcased the organic connection between those who make music and those who support music-making.”

That concert also featured Cosimo Fabrizio ’21, a government and economics major, who joined Marsalis’ quintet on the concert stage.

Fabrizio, a guitar player from South Orange, New Jersey, met Marsalis as a middle-schooler in a pre-college program for classical guitar at The Juilliard School. Fabrizio then worked with him again in a jazz program hosted by Marsalis’ Jazz at Lincoln Center. They’ve kept up the relationship since then.

“He’s helped me pursue my interests inside and outside of music,” including plans to attend law school next year, Fabrizio said.

Marsalis invited him to join in the band’s Saturday morning rehearsal and the show on Saturday night, where Fabrizio soloed on several numbers.

“I was grateful for the opportunity because these guys are at the highest level of musicianship that you will find,” he says, “and I was proud to represent Cornell on stage.”

Musicians write a story together

Many of the students who interacted with Marsalis and his band during the week embraced his messages of community and passion.

On Nov. 4, Marsalis and his musicians listened to three Cornell jazz combos, offering advice and critiques.

To prepare for this opportunity, the Bissett Sextet – comprised of Eric Witt ’22, Andres Aradiallas Fernandez ’25, Vincent Eng ’22, Alex Mayo-Smith ’22, Ben Ramirez ’22 and Adam Dixon ’25 – rehearsed “Caravan” by Juan Tizol weekly until “we knew the critiques would be about the feel of the music rather than us missing a note,” says Mayo-Smith, a trombonist majoring in mechanical engineering and minoring in history.

Domo Branch, the drummer in Marsalis’ ensemble, spent time with Ramirez. “He talked about the history of the music and how it moved from being strictly drum-based with congas and bongos. We talked about some ideas for emulating that sound as you move it onto a drum set,” Ramirez says. “I wasn’t expecting that kind of one-on-one.” 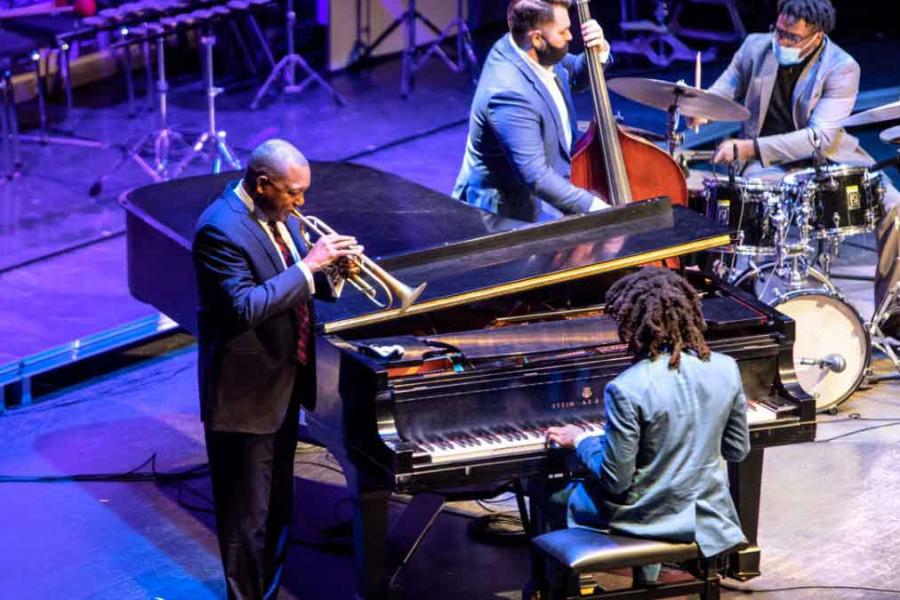 Eng says he was most struck by Marsalis comparing a performance to writing a story. “Everyone is contributing to writing one story, but we all have our own part,” Eng says. “We should think about having a discussion between instruments rather than worrying about crafting our own solos.”

“Professor Marsalis energizes all around him and challenges folks to forge authentic connections in music and beyond,” said Paul Merrill, Gussman Director of Jazz and Associate Professor of the Practice. “The feeling of working with and performing for Professor Marsalis and his quintet is an experience that our students will remember well beyond their years on campus.”

Yicong Wu ’22, a tenor saxophonist in the wind symphony, said he’s already shared some of the lessons he learned this week with his a cappella group.

“He has a way of relating music to life in a way I’ve never heard before,” says Wu, an industrial and labor relations major. “He really touched my soul.”

At Cornell, Wu said, music students often work diligently to get the notes right, practicing difficult runs over and over until they’re perfect. And that’s important, he says, but Marsalis also put an emphasis on understanding the history of the music and the stories of its composers and players.

The Marsalis visit embodied the mission of the A.D. White Professor-at-Large Program: to bring world-class scholars and artists to campus to engage with the Cornell community in multiple forums.

Marsalis also gave talks in a psychology class, a music class and was part of a panel discussion, “What to do with your life?” at Hans Bethe House. Joining him on that panel were Ray Jayawardhana, Harold Tanner Dean of Arts & Sciences, Amy McCune, professor of ecology and evolutionary biology (College of Agriculture and Life Sciences) and Andrew Hicks, associate professor of music and medieval studies (A&S).

Marsalis talked about the importance of engaging both the mind and the body in education, of finding balance in life and of creating one’s own definition of success. He also emphasized the importance of embracing your role within a larger community.

“The most important thing to learn is the interconnectivity of all things,” he said. “We’re each a strand of a giant mosaic that’s changing colors all of the time.” 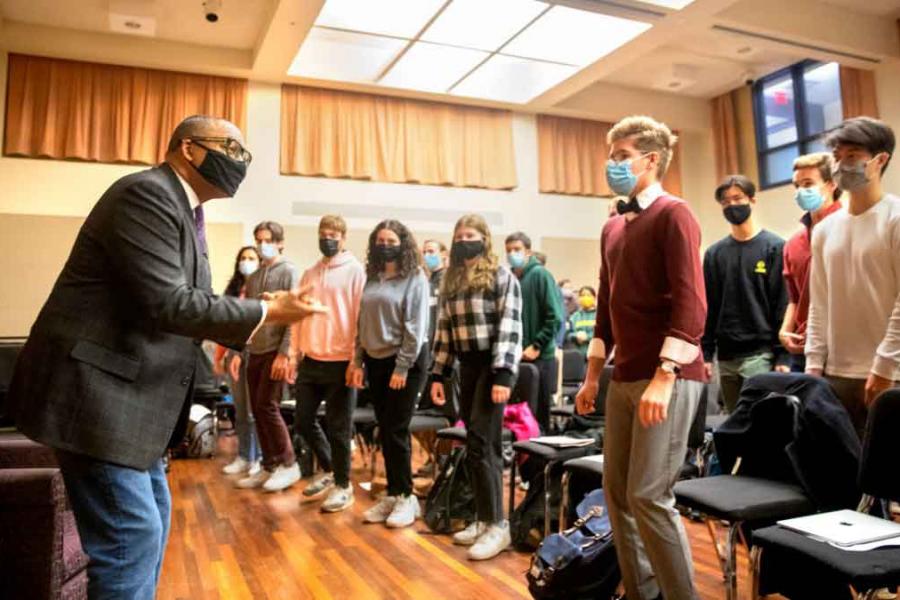 Sofia Pereira ’23, a physics major, says she was encouraged by his message about finding your own way. “It seems like everyone in my major knows exactly what they’re doing and has a path set, so it’s nice to know that it’s OK to continue to ask questions and learn more different fields,” she says.

Marsalis lectured Nov. 5 on “Democracy and the University,” speaking about his most recent composition, “The Democracy! Suite,” released earlier this year. Steven Pond, associate professor of music (A&S) and Marsalis’ host for his visit, chatted with Marsalis during that talk.

“When the history of this time is written, Wynton will be part of that narrative,” Pond says, relaying the words of Senior Lecturer Harry Segal during Marsalis’ visit to his psychology class. Pond repeated and amplified that comment: “Think about what responsibility that places on him, but it also places some responsibility on us. He’s an example that we should follow.”

During his talk, Marsalis touched on a university’s role in opening students’ minds to new ideas and to understanding each other.

“As a musician, I’m fascinated with forms and how they work and I look at our democracy in the same way,” Marsalis said. “Jazz is a perfect metaphor for democracy. It involves close sympathetic listening, negotiating moments of leadership, sharing a vision and times of stepping back and showing courtesy.”

Students who worked with Marsalis said it was an experience they’ll always remember.

“We were having a hard time understanding how this song was supposed to sound; he played it once and there was an immediate transformation in the band. It was like a light switch went on hearing him play,” said Adam Ziccardi ’21, a religious studies major and principal hornist in the wind symphony.

Perkovich said, “Nothing has really compared to this experience.”

Read this story in The Cornell Chronicle.