When Isabella Culotta ’22 and Matéa LeBeau ’22 submitted a grant proposal – for an art exhibit centered around the use of human waste as fertilizer – to the Cornell Biennial’s call for entries, they laughed.

“We said, ‘That was fun, see you around,’” said LeBeau. “We were serious about the proposal but never thought it would get funded.”

But the Cornell Council for the Arts (CCA), which runs the Biennial, did fund the proposal, which was first written for a class and combined LeBeau’s interest in art and environmental activism with Culotta’s interest in soils and sustainability. With the funding, their idea became a reality, launching LeBeau and Culotta on an intense, monthslong collaboration that changed how they see themselves and their disciplines.

The resulting living sculpture, “Waste Not,” installed through September in a corner of the Arts Quad, consisted of a circle or “council” of toilets with edible plants and flowers growing from the bowls. It was more than met the eye – Culotta, a double major in plant sciences and international agriculture and rural development in the College of Agriculture and Life Sciences, and LeBeau, a bachelor of fine arts major in the College of Architecture, Art and Planning (AAP), worked for months to figure out how to procure human waste and process it into the biochar they used to grow the plants, in addition to designing an exhibit that would be both visually arresting and informative.

“This project totally changed me as a scientist,” said Culotta. “I look at the scientific process differently and the work and goals of science and outreach differently, too. I also now have this whole new layer of respect for artists – it takes so much vulnerability.”

“Both of us had to exit our specialties and be vulnerable with each other and not be afraid to ask questions,” said LeBeau. “I feel really strongly about the collaboration between art and science and how the disciplines can aid each other, and this was a perfect example – we’ve needed each other this entire time and have learned so much from each other.”

Culotta and LeBeau are among more than a dozen students to take part in and benefit from the Cornell Biennial, which aims to serve as an anchor for the arts at Cornell, bringing invited artists from around the world to campus and facilitating interdisciplinary art across Cornell’s departments and colleges. The theme of this year’s biennial, the fifth, is “Futurities, Uncertain,” with performances, installations and panels that explore expressions of the future in the face of uncertainties brought on by climate change, the pandemic and racial and social injustice.

“It’s really energizing how readily the Cornell community has responded to this opportunity to think artistically and creatively. And in many degrees, it can change paradigms,” said Timothy Murray, Biennial curator, CCA director and professor of comparative literature and literatures in English in A&S. “It’s exemplary of the spirit of the university, and Bella and Matéa’s partnership is exemplary of the promise of the Biennial.”

Additional student-led projects have included a soundscape series and workshop organized by Esther Kondo Heller, a master of fine arts student in poetry; the development of a curriculum exploring spatial imagination and socioeconomic structures in Ossining, New York, the hometown of Kellen Cooks ’23, an urban and regional studies major (AAP); and a wild garden on Libe Slope planned and planted by Matthew Dallos, doctoral student in history.

With joint funding from Cornell’s Mellon Collaborative Studies in Architecture, Urbanism, and the Humanities, the Biennial has also included an inaugural opportunity for students to curate their own exhibitions. Two interdisciplinary groups of graduate students were selected: one from Africana studies, comparative literature and romance studies, who featured art and performances from Brazilian and South African artists; and a group from human centered design in the College of Human Ecology and anthropology, who will display the diverse work of five fabric artists and three community organizations that open dialogues around social justice. The exhibition, “Material Resistance,” opens Nov. 7 in the Jill Stuart Gallery. The group will also host an interactive workshop with the Social Justice Sewing Academy on Nov. 11 at noon at the Herbert F. Johnson Museum of Art.

“We’ve been able to bring our own experiences to this collaboration, and it’s really allowed for a transformative experience,” said Dyese Matthews, doctoral student in fiber science and apparel design. “Social justice and empowerment are at the center of our work as artists and researchers, and we wanted to give as many artists as we could the space to show their work.”

Ami Kokui Tamakloe, doctoral student in anthropology, said the intense collaboration and logistical challenges taught them to be flexible, while also holding true to what was important to them. “I dare say, we’ve done a phenomenal job,” she said. “We hope people see themselves and can reflect on their humanity, how their actions may contribute to or alleviate some of the injustices that groups of people face. We also want people to have fun, and enjoy it and share.”

In addition to the flurry of exhibitions during the fall semester, projects can have a lasting imprint on campus. Dallos proposed a wild garden for the 2020 Biennial, much of which was canceled due to the pandemic. But in 2021, Dallos, with the help of the Cornell Grounds Department and volunteers, was able to plant the garden on Libe Slope; it’s now established and included in the 2022 slate of exhibitions. Dallos said it fits the new theme.

“When we think of horticulture, gardens, we think of designs that are imposed on a site. I want this plant to be here, to grow in this pattern,” said Dallos. “With the Libe Slope garden, I wanted to insert a moment of wildness into the everyday built environment of campus, and rather than imposing a design, it provides a condition – where we look and see what these plants do on the site. As it matures, we’ll modify our idea of the original design – we don’t know what it will look like in two years.”

For students, the most lasting impacts of the Biennial have been the connections made, both in the making of the work and in its presentation.

“It helped me discover new communities on campus and new individuals who have shared interests, that I would not have otherwise met or interacted with,” Dallos said. “And building the site has created this place where we’ve been able to have these conversations.”

“Art is such a powerful communication tool, it transcends language and cultural barriers,” LeBeau said. “It brings people together. We had so many people engage with us – all because we had something to share.” 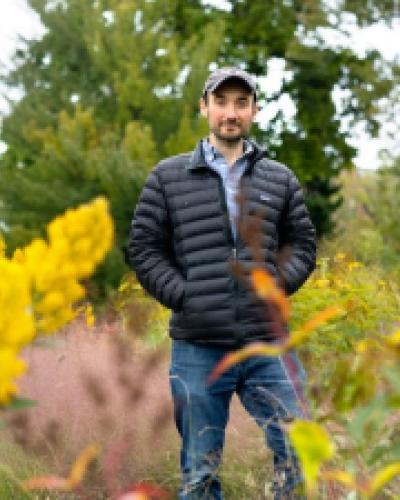